Kili Teke is a significant advanced exploration porphyry gold-copper project with an existing mineral resource, and potential for further re-optimization and discoveries to increase overall value.

KRL entered a definitive agreement with Harmony Gold (PNG) Exploration Limited (“HGEL”) to acquire 100% of the Kili Teke project on April 6, 2022. Updates on the status of the acquisition will be provided on SEDAR and KRL’s news releases.

To date over 36,000m of drilling has been completed and has indicated significant exploration resource upside, with near surface, high-grade Au skarn mineralisation not yet included in the defined Mineral Resource.

KRL has identified potential for re-optimisation, bringing Kili Teke significantly closer to production as an open-pit mine to increase potential economic returns;

The Project comprises of EL 2310 and is located approximately 40km west-northwest of the Porgera Gold Mine, in the Koroba-Kopiago District of Hela Province, PNG. EL 2310 was granted to HGEL in May 2014 and has been renewed three times. The EL remains in good standing and is currently subject to a further renewal application at the end of the current term in May 2022. Pending renewal, the EL remains on foot with KRL entitled to continue to explore the project as is customary under PNG mining law.

The Project lies within the Papuan Fold Belt, a mixed terrane of limestone and clastic sediments which have been strongly folded and thrusted during the evolution of the New Guinea magmatic island arc, on the northern margin of the Australian tectonic plate.

These world-class ore deposits are all located close to major deep-seated transfer faults which accommodate lateral slip between adjacent segments of the Australian plate, as it moves northwards. Kili Teke is located on the strike extension of a transfer fault and is highly prospective, as shown in Figure 1. 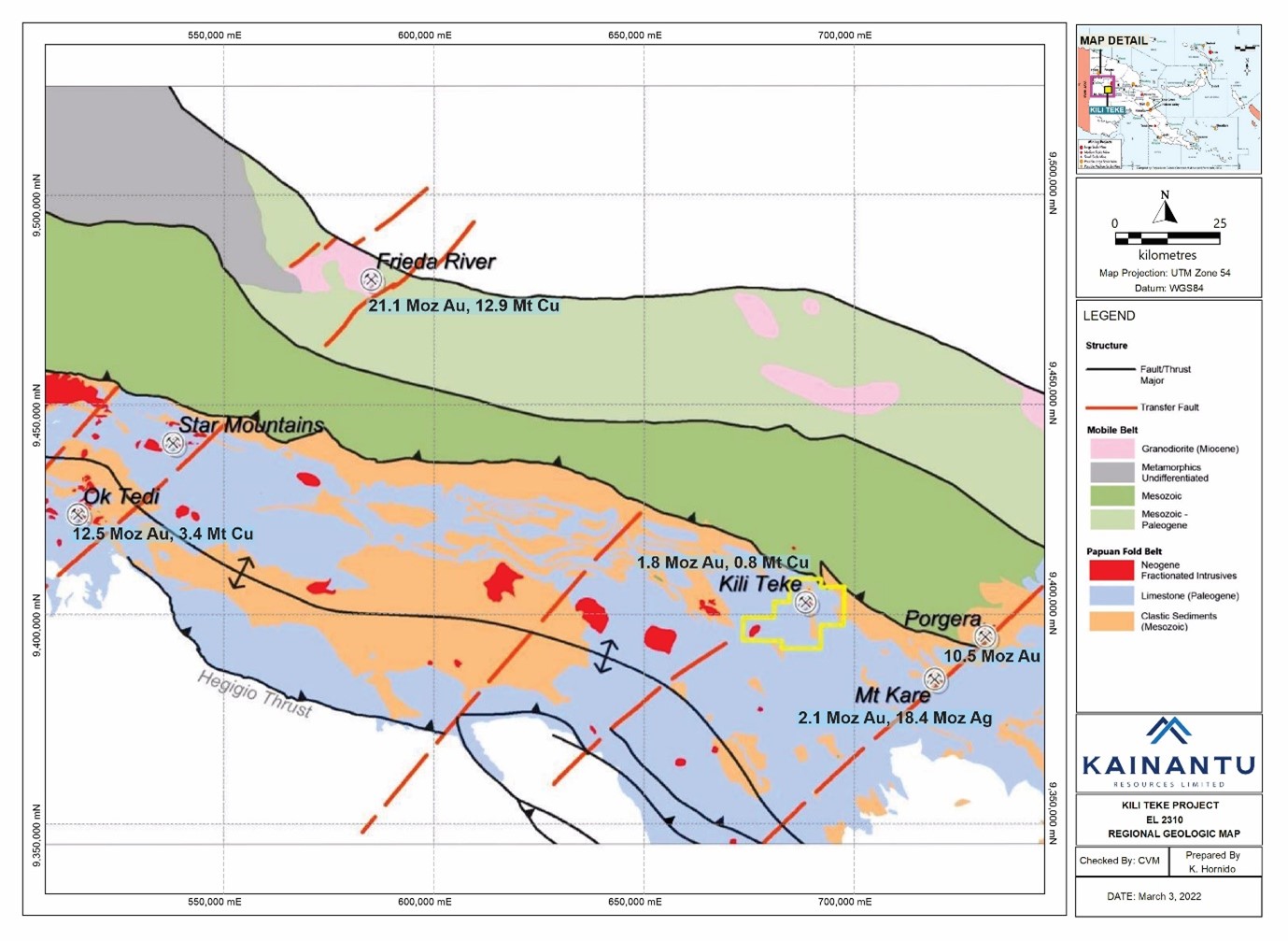 Kili Teke is hosted by a late Miocene (3.59±0.5Ma to 3.50±0.04Ma) multi-phase, intermediate-composition, intrusive complex (including diorite, microdiorite and hornblende porphyry lithologies), and associated breccias and skarns, as indicated in Figure 2. The latter occur both within (along structures), and on the margins of the intrusive complex, in limestone host rock. 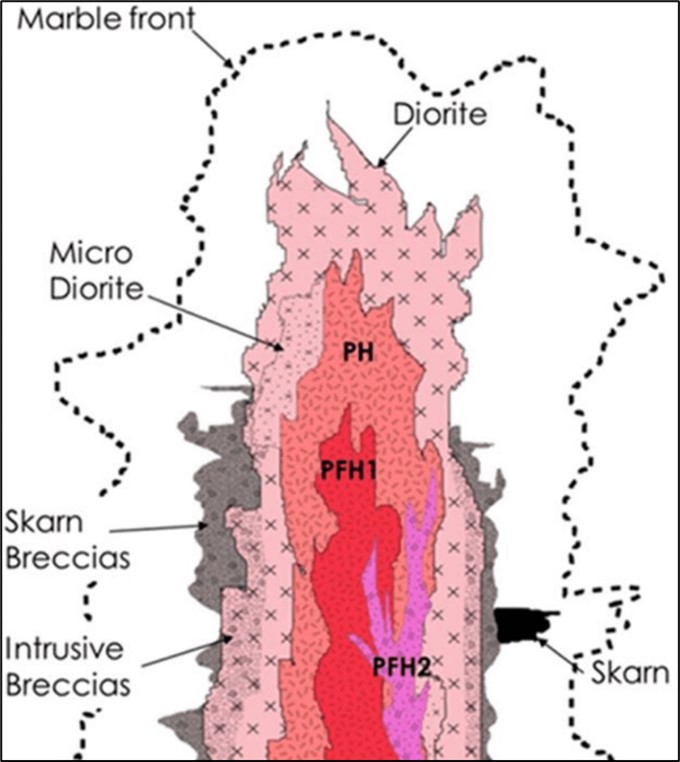 Mineralisation is exposed at surface and indicates that the upper part of the deposit could be mined via open pit.

Studies indicate the strongest mineralisation is developed as disseminated and vein infill chalcopyrite, with lesser bornite, pyrite, gold and molybdenum, in two classic, porphyry-style stockworks: the Northern and Southern Stockwork Zones (NSZ and SSZ). Both of these high-grade zones are offset at depth by post-mineralisation faulting.

Several zones of high-grade skarn mineralisation are also recognised, but the drill density is insufficient to confirm continuity at this stage and they have been excluded from the current Mineral Resource estimate. In due course, a priority for KRL will be further investigation of this skarn mineralisation.

Importantly, the controls on high-grade mineralisation have not been defined. There remains residual upside potential to expand high-grade zones.

Figure 3 indicates high-grade skarn areas which remain a viable exploration target, and an opportunity to increase the metal inventory significantly. The inclusion of skarn mineralisation in a previously reported Mineral Resource have the potential to add 11% and 10% additional Cu and Au, respectively, to the mineral resource estimate. 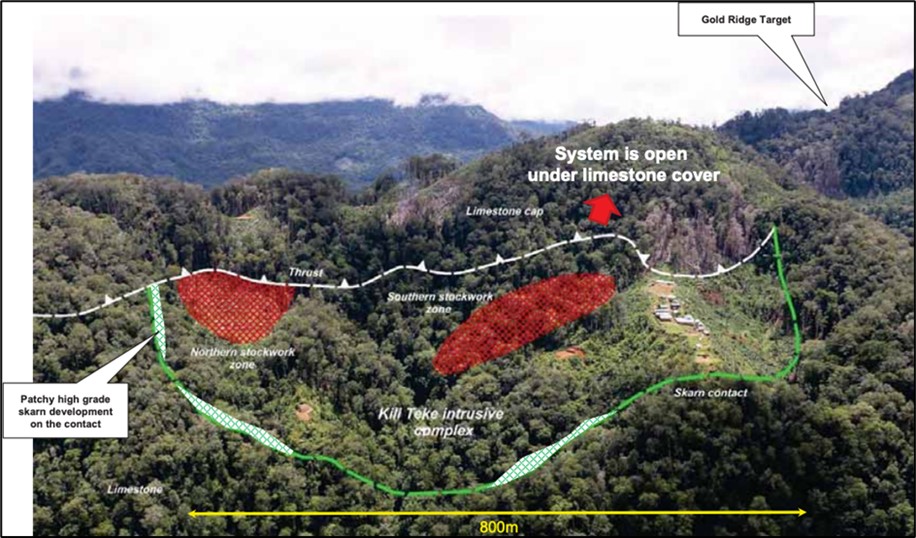 The Ridge Gold Anomaly (RGA) target, is the primary exploration focus, located within 1km of the main resource. This target was defined by surface geochemistry in stream sediments, and has subsequently been confirmed in soils and bedrock, via trench sampling (5m@0.37g/t Au & 0.77% Cu) and anomalous rock chips (up to 3.5g/t Au). The bedrock anomaly potentially extends beneath a limestone cap cover sequence, which means that RGA may be a much larger target than has been considered before.

Two additional exploration targets have also been identified in close proximity to the Kili Teke deposit.

To date, desk top studies by KRL suggest that an open pit operation is potentially viable (with a robust economic return) on the definition of more high-grade ore. In due course, this would require further infill drilling, focused initially on the two high-grade stockwork zones (NSZ and SSZ) and the marginal skarns; and any other features that can be targeted if the controls of mineralisation can be determined. KRL expects further investigation on the viability of these options are part of the intended work towards a PEA and Feasibility Study.

Local infrastructure to support a new mine at Kili Teke is favourable. The Hides gas power station, which supplies power to the Porgera Gold Mine, is 50km south of Kili Teke; and the largest sealed airstrip in PNG, at Komo, is 80km to the south (and there are dirt strips much closer, at Auwi and Tari). The government has announced funding to build sealed roads between the local towns of Komo, Tari, Korobo and Mendi, all of which would serve a future mine at Kili Teke.

KRL stakeholders have significant experience operating in the Hela District where the Project is located. Based on initial discussions with relevant community groups, KRL is confident it can develop a viable community programme at Kili Teke.

KRL will continue to work co-operatively with the management of HGEL to obtain all necessary regulatory approvals to close the acquisition and consolidate the Project into KRL.

Closing of the Transaction is subject to KRL raising financing of up to US$1 million (or waiving this condition) and other conditions detailed in the announcement on April 6, 2022.