Data is currently being analysed. Assuming a positive assessment and in combination with mapping and geochemical sampling, this work is a key milestone step for the Company; and supports the objective of accelerating activities towards a drilling program.

Whilst being independently reviewed for KRL, mobilisation of the airborne program was successfully undertaken in co-ordination with other successful operators in the Kainantu region, Papua New Guinea (“PNG”).

“This is the first time in over 10 years that an airborne geophysical survey has been done in Kainantu gold belt. While our teams are assessing the data, preliminary trends look positive and support a view that KRL North is highly prospective, especially given its location adjacent to other successful miners, some of which has notably expanded resources and signified gold and resource extensions near KRL properties.

In addition to the cost savings from regional cooperation on the geophysics program, completing this work means KRL will be in a strong position to accelerate moves towards drilling at both KRL North and KRL South.”

Both projects are located along the world renowned Kainantu Transfer Structure, associated with highly successful precious metal mining across the district.

At KRL North, historic aeromagnetic data sourced from the PNG Mineral Resource Authority library has indicated proximity and structural similarities between this project and Bilimoia Mineral Field hosting the K92 mine.

Within 2 to 4 km SE of KRL North and on strike and along trend, two identified significant mineralised vein systems (Maniape and Arakompa) have been observed, with a conceptual mineralising porphyry source underlying the ground between Arakompa and the SW corner of KRL North (see Figure 1). While non-JORC compliant (or subject to an NI 43-101 technical report), historic data from drilling by a former miner in the 1980s and 1990s reported to indicate a resource of 560,000 oz Au at 2.2 g/t at Maniape; and 798,000 oz Au at 9.0 g/t at Arakompa. 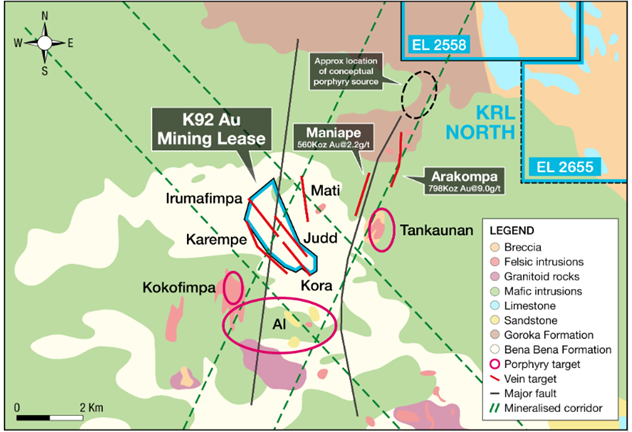 In 2021, the Company conducted a mapping and sampling programme to identify further porphyry related alteration and mineralisation targets within KRL North, as potential extensions of Maniape and Arakompa.

Amongst other objectives, this programme was intended to assess whether the enhanced structural permeability extends to KRL North from the adjacent rich Bilimoia Mineral Field (where K92 operates). Assuming positive outcomes, KRL would then be justified to conduct further investigations (including an airborne geophysics program).

In this regard, results have been extremely encouraging and do support a decision to undertake further studies.

As noted above and during 2021, KRL completed a comprehensive stream sediment and soil sampling programme covering the eastern, central, and western stream systems forming the major drainage pattern within EL 2558/KRL North.

Mapping and sampling was concentrated within the southern half of KRL North, where several altered and intrusive bodies were observed and interpreted as associated with the Elandora Porphyry.

For initial coverage, a total of 741 samples were collected (including 246 rock outcrop and float chip, 33 stream sediment, 14 pan concentrate and 448 soil samples) – see Attachment 1 below for details. Results returned a number of high Au spot values in correlation with anomalous pathfinder elements; in particular clustered within the central south of EL 2558. In summary, analysis uncovered an Pb-Zn-Te signature towards the north; and a Mo-Bi-Sb-As signature towards the south: see Attachment 1 for further particulars.

Combined with lineament analysis, sampling also indicated the presence of both Au base metal veins and potential porphyry style mineralisation at depth, associated with a ring feature of approximately 1.5km in diameter located on southern boundary of KRL North (see Figure 2 and further discussion below).

The ring feature may indicate a buried and/or recently emergent intrusive complex which tends to dome the surrounding host rocks. In this regard, it is also noted the ring feature lies close to where an underlying potential mineralised porphyry source has previously been hypothesized by earlier explorers.

Further ring features were also verified from dykes mapped and geochemical analysis undertaken to the N and W of EL 2558/KRL North; with doming in some areas interpreted as due to the intrusion of Elandora Porphyry and Akuna Igneous Complex rocks

Overall, the 2021 field work and analysis confirms the Company’s view as to the prospective nature of KRL North the project and the likely extension of high-grade mineralisation from the adjacent K92 project in the Bilimoia Mineral Field. 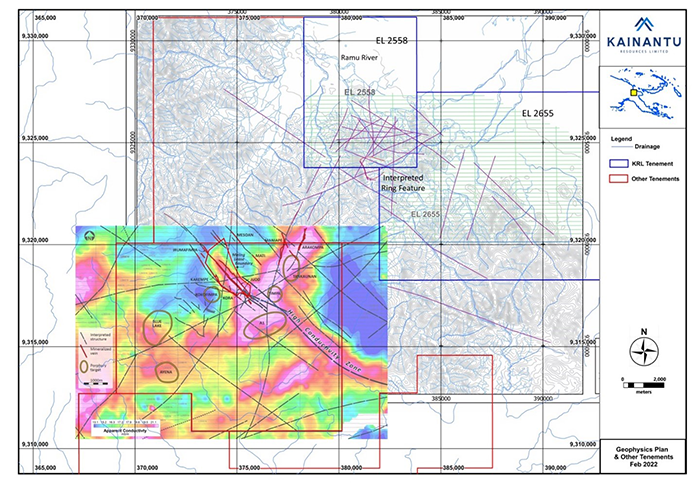 During H1 2022, KRL will undertake further soil sampling and mapping adjacent to the ring feature identified at KRL North (combined with more refined lineament analysis to incorporate SE aspects of the project in EL 2655).

Encouraging sampling results and analysis has confirmed the Company’s views on the prospective nature of KRL North, justifying an immediate airborne geophysical survey of the area. In combination with ongoing mapping and sampling, such a survey will enable to Company to accelerate steps to delineate exploration and drilling targets.

In this regard, KRL co-operated with other miners in the Kainantu region in Q4 2021/Q1 2022 to share resources to mobilise for airborne geophysical surveys over respective projects. While data collected was not pooled and will be independently assessed by each company (including KRL), the co-operation arrangements enabled KRL to complete a survey of both KRL North and KRL South in January 2022.

Airborne survey data was collected under contract for KRL by the Canadian firm, Expert Geophysics (who operate the Mobile Magneto Tellurics, or Mobile MT system and have successfully used the technology internationally).

The airborne geophysics programme was flown over all of KRL North; and in addition to key areas of interest in and around the Tirokave area of KRL South (including the East Avaninofi and Yaoro Ridge prospects). The total area covered was 186 km² (involving 1,000 line-kilometres of survey).

At KRL North, the area covered was contiguous with the adjacent K92 project, which has also published positive results from their recent geophysical survey. In this regard, please refer to Figure 2 (above), which overlays recently published airborne survey analysis against KRL’s regional lineament map inclusive of KRL North.

KRL is analysing the data received and expects to complete a final report during April, inclusive of recommendations for areas of further work leading towards defining drilling targets amongst other positive outcomes. While awaiting further feedback, preliminary analysis is encouraging and continues to support KRL’s view as the prospective nature of both KRL North and KRL South.

Completing the geophysics survey is a highly satisfactory outcome for KRL. It has enabled the collection of data at a fraction of the cost of mobilising as a single company entity; potentially also reducing the lead time to commence drilling by up to 18 months.

KRL will continue field programmes at both KRL North and KRL South to define drilling targets. Further updates will be provided in due course, including the outcome of final analysis from the aerial geophysical survey.

The Company also announces the grant of 770,000 stock options that are exercisable for a period of five years at a price of C$0.19 per share to various directors and officers. The options will be subject to vesting over two years and certain hurdle price conditions. The granting of stock options is part of KRL's strategy to attract and retain talent, as well as motivating its team to work towards ensuring the success and value creation at KRL.

The scientific and technical information disclosed in this release has been reviewed and approved by Graeme Fleming, B. App. Sc., MAIG, an independent “qualified person” as defined under National Instrument 43-101, Standards of Disclosure for Mineral Projects.

Both KRL North and KRL South show potential to host high-grade epithermal and porphyry mineralisation, as seen elsewhere in the high-grade Kainantu Gold District. The May River project is in close proximity to the world-renowned Frieda River Copper-Gold Project, with historical drilling indicating the potential for significant copper-gold projects. KRL has a highly experienced board and management team with a proven track record of working together in the region; and an established in-country partner.

Neither the TSX-V nor its Regulation Services Provider (as that term is defined in the policies of the TSX-V) accepts responsibility for the adequacy or accuracy of this release. Disclaimer and Forward-Looking Information Mineralization hosted on adjacent and/or nearby properties is not necessarily indicative of mineralization hosted on the Company’s property. The data disclosed in this release relating to drilling results is historical in nature. Neither the Company nor a qualified person has yet verified this data and therefore investors should not place undue reliance on such data, and no representation or warranty, express or implied, is made by the Company, its affiliated companies, or any other person as to its fairness, accuracy, completeness, or correctness. This release contains forward-looking statements, which relate to future events or future performance and reflect management’s current expectations and assumptions. Such forward-looking statements reflect management’s current beliefs and are based on assumptions made by and information currently available to the Company. All statements, other than statements of historical fact, are forward-looking statements or information. Forward-looking statements or information in this news release relate to, among other things: formulation of plans for drill testing; and the success related to any future exploration or development programs. These forward-looking statements and information reflect the Company’s current views with respect to future events and are necessarily based upon a number of assumptions that, while considered reasonable by the Company, are inherently subject to significant operational, business, economic and regulatory uncertainties and contingencies. These assumptions include; success of the Company's projects; prices for gold remaining as estimated; currency exchange rates remaining as estimated; availability of funds for the Company's projects; capital, decommissioning and reclamation estimates; prices for energy inputs, labour, materials, supplies and services (including transportation); no labour-related disruptions; no unplanned delays or interruptions in scheduled construction and production; all necessary permits, licenses and regulatory approvals are received in a timely manner; and the ability to comply with environmental, health and safet laws. The foregoing list of assumptions is not exhaustive. The Company cautions the reader that forward-looking statements and information involve known and unknown risks, uncertainties and other factors that may cause actual results and developments to differ materially from those expressed or implied by such forward-looking statements or information contained in this news release and the Company has made assumptions and estimates based on or related to many of these factors. Such factors include, without limitation: fluctuations in gold prices; fluctuations in prices for energy inputs, labour, materials, supplies and services (including transportation); fluctuations in currency markets (such as the Canadian dollar versus the U.S. dollar); operational risks and hazards inherent with the business of mineral exploration; inadequate insurance, or inability to obtain insurance, to cover these risks and hazards; our ability to obtain all necessary permits, licenses and regulatory approvals in a timely manner; changes in laws, regulations and government practices, including environmental, export and import laws and regulations; legal restrictions relating to mineral exploration; increased competition in the mining industry for equipment and qualified personnel; the availability of additional capital; title matters and the additional risks identified in our filings with Canadian securities regulators on SEDAR in Canada (available at www.sedar.com). Although the Company has attempted to identify important factors that could cause actual results to differ materially, there may be other factors that cause results not to be as anticipated, estimated, described, or intended. Investors are cautioned against undue reliance on forward-looking statements or information. These forward-looking statements are made as of the date hereof and, except as required under applicable securities legislation, the Company does not assume any obligation to update or revise them to reflect new events or circumstances.